Could green façades be the façade of the future? The idea of covering buildings in pollution-absorbing vegetation might seem like a win-win in a world where businesses have to become more sustainable. The fields of urban planning and architecture have to be seen to be stepping up to the plate.

Buildings are becoming more environmentally friendly all the time. They’re now being built from entirely recycled materials, with fully integrated solar panels (BIPV), and, of course, with lush green façades that could turn any urban town into a green space the envy of any country village. But is a green façade a fully functional façade? Or is it just another type of greenwashing; a way to be seen to be environmentally friendly without having any meaningful impact at all?

What is a green façade?

If you’ve not come across this term before, it’s quite a simple concept. The façade of a building is covered in vertical vegetation. The benefits of this may include:

The vegetation that makes up the green wall also protects the building from direct solar radiation. This could lengthen the life of the building, and reduce maintenance costs.

Greenery naturally absorbs heat from the sun- it needs this heat and light for photosynthesis, the method by which it produces food. This heat is held in the walls of the building, making green façades a natural form of insulation. Even when the temperature drops at night, green walls emit less heat, making them a natural and self-repairing form of insulation.

One of the primary benefits of green façades is that they emit water vapour, which naturally cools the air. If a large number of buildings adopted green walls, this could have a potentially larger impact on the entire urban area, creating a microclimate with cooler air and better air quality. Of course, the implications for the wider climate cannot be ignored.

Using greenery on walls is nothing new. In Germany, the term “Architektentrost” means “Architect’s consolation” and often refers to the use of greenery to hide poor building designs or unsightly façades. That’s certainly still a function of greenery today, but clearly, there are many more potential benefits. But does the effort balance out the benefits?

Green façades can be split into three main types:

Self-climbing plants are plants which use their own tendrils, suckers or twining stems to climb the building themselves. These require minimal maintenance, but it’s important to remember that any plant which has the capacity to cover a several storey building needs a lot of space for roots. It’s important to ensure that there’s enough room underground to accommodate this.

Some plants require a structure, like a trellis, to climb up. This increases costs at it involves building a secondary façade, but again, maintenance is relatively low as long as the structure is fully suitable for the types of plants chosen.

Some buildings simply don’t have room in front of them to grow plants. Green buildings require access to the soil at the base of walls, and not all buildings have this. This is when plants need to be grown in containers. This is either by training plants upwards from pots on the ground, or by using hanging baskets or pots on the roofs or balconies and trailing plants downwards. It’s hard to see if the benefits outweigh the costs and effort here, as each of these containers needs individual watering, fertilising and care, making this a costly and time-consuming endeavour.

Another way of “greening” a building is by encouraging a moss façade. The advantages of moss are that many species remain green all year round, and it’s relatively easy to encourage to grow. Moss is also excellent at absorbing pollutants, and has no roots to speak of so can be applied without fear of damage to buildings, and requires next to no maintenance in a climate that has plenty of rain. 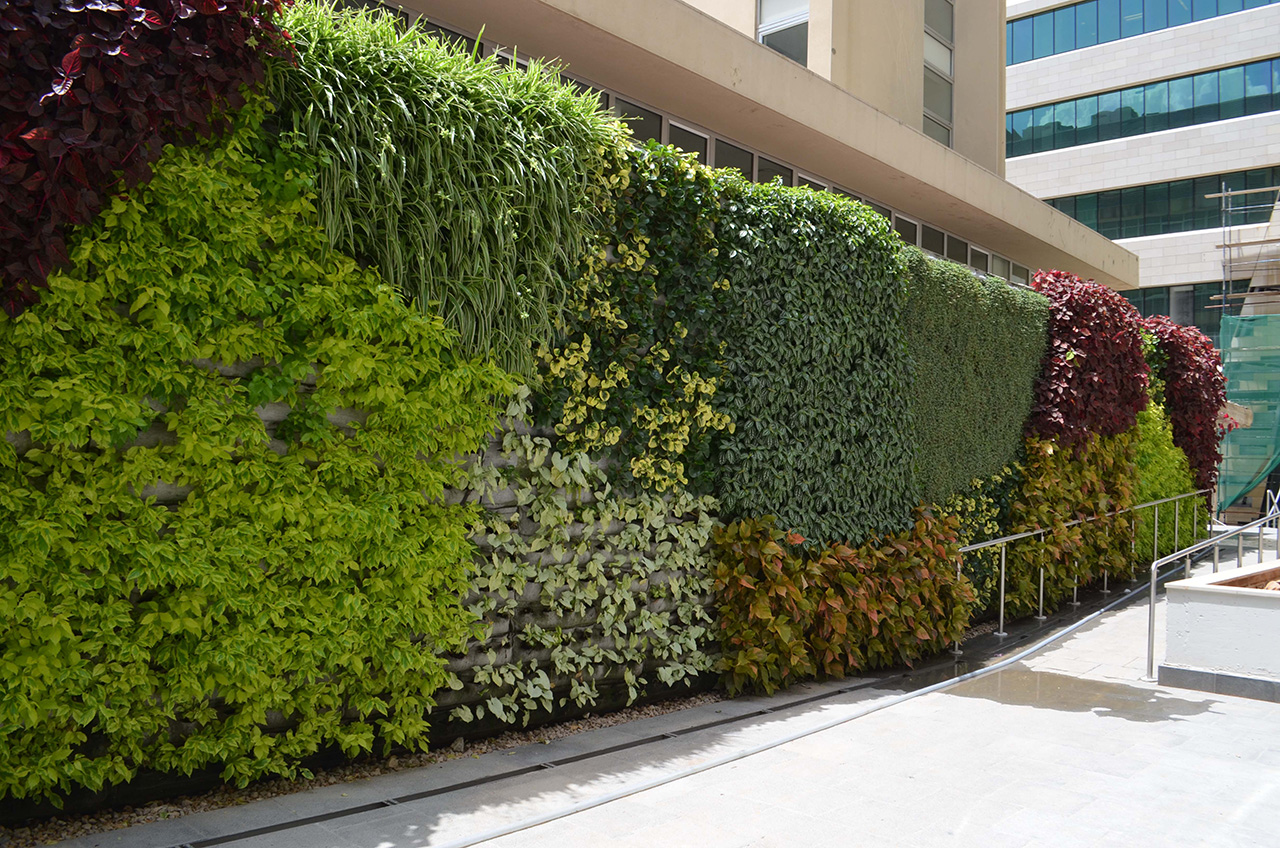 Green façades and living walls are both types of vertical vegetation. Living walls differ from green walls in that the plants are directly integrated into the walls themselves, rather than grown in the earth beneath the building or in separate containers.

Living walls tend to be more costly, depending on the design. Sometimes living walls are integrated into facilities that are traditionally seen as less than “green”. In Leeds, West Yorkshire, the primary Recycling and Energy Recovery Facility deals with household waste. They transformed their south façade into one giant living wall- one of the largest of its kind in Europe. They claim that this is to improve the biodiversity of the city, and reduce the negative visual impact of the large, waste processing facility.

There’s no doubt that more plants in a city is a good thing. Some of the benefits listed above have an impact for individuals, businesses, and even the towns at large. But it’s important to recognise that unless thousands of buildings in each urban area adopt these practices, the overall impact will be minimal. Using green façades as a way to champion environmental policies could be a misnomer, especially if tons of energy and water is pumped into looking after the plants.

A final point to note is that the benefits of additional greenery aren’t just physical and environmental. Humans react positively to plants, and green façades can have a beneficial psychological effect on the local population. As more and more architects and businesses consider adding vertical vegetation to their building designs, cities are bound to become better places to live- one green wall at a time.